During the past couple of months, I have received a great deal of constructive feedback on DianHua Dictionary v2.0.  Several users have helped me identify some bugs in some of the newer functionality.  I also performed a thorough code review to try to clean up some memory management issues.  As a result, the following issues have been identified and corrected for an upcoming release:

Beyond these bug fixes, I decided to go ahead and add some study tools to the dictionary to take better advantage of bookmark data.  My patience with some of the study tools I had been using was exhausted as of last week so I was ready for something that better met my own needs.  I’m hopeful the resulting tools will help you with your Chinese studies as well.

As you might have guessed, one of the tools I created is Flashcards. 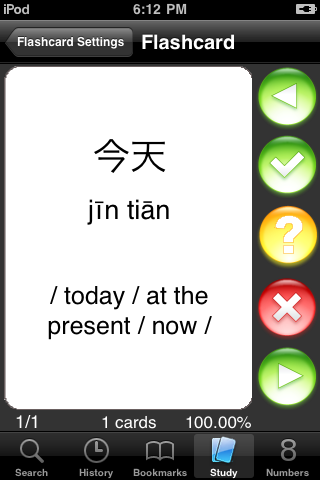 One of the things that has most frustrated me about other tools I have used is that if you are studying characters, it isn’t always easy to show the character on the back of the card.  It didn’t take much character studying for me to realize I retain the characters much better if I see them right next to the Pinyin. Consequently, DianHua Dictionary’s Flashcards allow you to select exactly what you want to see on the front and back of the cards. 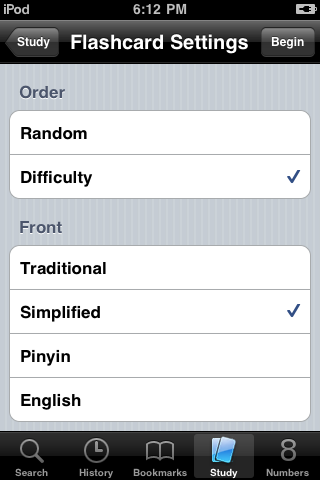 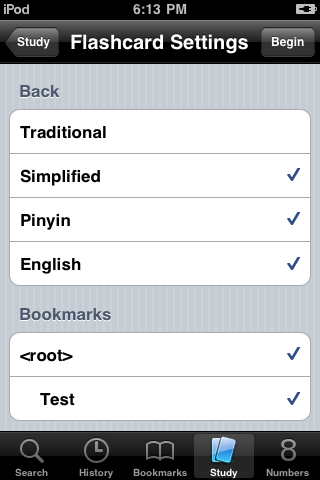 As you can see from the images, all fields are available on both the front and the back of the cards.  These images also show the two options for ordering Flashcards.  The first is Random which is self-explanatory.  The second is titled Difficulty, and it is my attempt at creating a study algorithm that emphasizes Flashcards you have identified as a problem.  This is an algorithm I will fine-tune as I do more research on learning algorithms, but I am optimistic that it is a reasonable starting point.

The other study tool I created came at the suggestion of one of DianHua Dictionary’s users.  It presents you with the Pinyin and/or English of a bookmark entry and asks you to type either the Traditional or Simplified characters.  It works off of the same metrics as the Flashcards so words you struggle with in one tool will be emphasized under the Difficulty ordering in the other.  Screen shots of the Writing Settings and study screen follow. 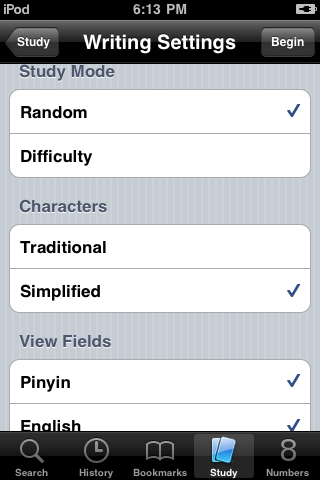 Like the other portions of DianHua Dictionary, these study tools pick up right where you left off if you get a phone call or other interruption.  The only caveat is I don’t attempt to track exactly which bookmarks have been studied in a session which means you might repeat some bookmarks upon re-entering the program, but the settings you have chosen and the number correct will be retained.

If you have any questions, comments, or recommendations, please let me know.