Information on JSQ, LLC's projects and products including DianHua Dictionary for iOS

Back to School Sale

It’s that time of year, and I felt like giving students a price break.  Through the end of August, the DianHua Dictionary Audio Module is on sale for $0.99.  After the sale, the price will return to $4.99.

One of Pleco’s Upcoming Features

Back in Fall 2008 shortly after the first release of DianHua Dictionary, I had a couple of users ask me about a camera-based dictionary look-up tool.  While I loved the idea, I had not the time, funding, nor expertise to undertake such a project.  It looks like Pleco has put in the time and money and come up with something rather remarkable.

Hats off to you guys.  I look forward to trying it out.

Contemplating DianHua on the iPad

When Apple first announced the iPad, I have to admit I was a bit underwhelmed. For whatever reason, the platform failed to capture my attention the same way the iPhone did. Of course, that was before I had one in my hands. Even though I’m a bit disappointed in the iPhone application compatibility and the accuracy of the keyboard, I must admit I am anxious to get to work adapting DianHua Dictionary. As I contemplate the first iPad release, I am torn between doing a basic iPad adaptation or doing something truly unique, something that would meet my Chinese studying needs far better than a basic dictionary.

To access the feature, login to DianHuaDictionary.com, click Bookmarks from the left Menu, and navigate to the folder you want to move.  Near the top of the page, you will see a drop-down box for selecting the new parent folder (leave this to the existing folder if you just want to rename a folder).  The entry field can be used to rename the folder as needed whether or not a new parent folder is selected.  Click Move to complete the operation.

Once you have moved or renamed a Bookmark Folder, use the Sync function in DianHua Dictionary on your iPhone or iPod touch to bring the changes from the web site to your device.

LianXiShuZi v1.0 is now available through the App Store.  This release brings Banking/Anti-fraud character practice to the application and fixes several bugs.  Among them was a program crash on any wrong answer in the Listening section.

A user alerted me to a bug with LianXiShuZi operating on devices running OS 3.x.  While taking care of that bug and preparing a release, I went ahead and added support for both Simplified and Traditional character sets along with the Banking/Anti-fraud characters. 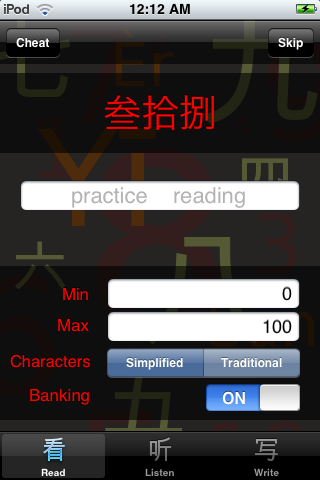 By popular demand, the next release of DianHua Dictionary will include Word Decomposition.  As you can see in the screen shot below, the definition page now includes entries for all of the components of a word.  You can touch any of these entries to go to their definition pages.  Also, notice the “Entries containing…” option.  It will search the dictionary for any entry that contains the displayed entry.  Both options can be incredibly useful when reading something that has words you don’t yet know. 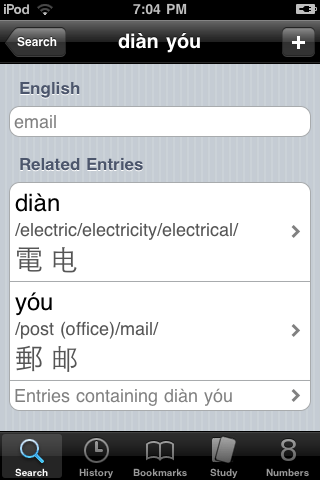 DianHua Dictionary v3.0.2 is now available through the iTunes App Store.  With this release, DianHua Dictionary now includes Study Tools to help you take advantage of entries you have been tracking in the Bookmarks function introduced in v2.0.  While DianHuaDictionary.com allows you to export Bookmarks for use in other software packages, it became apparent in my own studies that the easier it is to go from Bookmarking words in a dictionary to studying them, the better progress you can make in your Chinese studies.

The Flashcard Study Tool allows you to select any combination of Traditional, Simplified, Pinyin, and English on both the front and back of the Flashcards so you can study any direction or combination you prefer.  The 3 self-assessment options (correct, unsure, incorrect) are tracked to inform the Difficulty sorting algorithm what order to present the cards to better emphasize more challenging or new words.

The Writing Study Tool allows you to use any of the iPhone’s Chinese keyboards (Simplified, Traditional, Handwriting, or Pinyin) to test your ability to enter the Simplified or Traditional text of an entry based on the Pinyin and/or English.  Like Flashcards, correct and incorrect answers are tracked to provide information to the Difficulty sorting algorithm.

How the DianHua Dictionary Audio Module is Different

I finally took some time to read through the word-wide reviews of JSQ’s iPhone applications for the first time in a few months and noticed a few users taking issue with the number of entries in the DianHua Dictionary Audio Module.  My main goal in the initial release was to cover as much common language as I could given practical constraints with accurate pronunciations of words in Mandarin.  Each word you hear in the Audio Module was recorded by my friend Noah the way you might hear it in normal conversation.

During the time I was developing the Audio Module, several other developers released applications with Mandarin audio.  Of those I’ve seen, excluding ChinesePod’s new application, they use individual syllables to cover the entire dictionary.  Not only does this not let you hear words at a normal speaking pace, but some of these products are not applying basic pronunciation rules.  For instance, “yi1ban4” should be pronounced as “yi2ban4”, “ni3 hao3” should be pronounced as “ni2 hao3”.  With the DianHua Dictionary Audio Module, not only are all of the available words recorded as full words, but the tone change rules are honored.

Admittedly, when you see products touting audio for the full CC-CEDICT (or other) dictionary for $3 or $4, I can see how you would feel like you wasted money by buying the DianHua Dictionary Audio Module.  However, this is my starting point.  I am going to continue recording audio for the Audio Module now that it has shown some potential, and as an owner, you will continue to receive free updates for the life of the product.  I can also easily write the code to let the software combine syllables like other products.  In fact, I may do that in the interim while we keep recording audio, but my goal will be to cover as much of CC-CEDICT as possible without resorting to software solutions.

As always, if you have any comments, positive or negative, please feel free to contact me.  I love hearing from users so I know if what I’m doing is beneficial to you.  And keep posting those reviews.  I enjoy reading and learning from them.

DianHua Dictionary v3.0.1 BETA for iPhone OS 3.0 is now available to registered users.  If you have received a Provisioning Profile from me and have iPhone OS 3.0 installed on your iPhone or iPod touch, you should be able to download and install the upgrade.  Please Sync your Bookmarks prior to installing the update in case your data is lost.  Once the new version is installed, you will be able to Sync from the server to your device to restore the data.  Updates in this BETA release include:

If you would like to BETA test and have not previously contacted me, please let me know.  I can always use more eyes reviewing our new releases.